Your Guide to Destination Weddings in France

1. Getting Married in France: An Introduction

Paris is known as “the city of love” for good reason. France is one of the most romantic countries in the world for a wedding. The language, the food, and the gorgeous landscape all exude love, making France the ideal place to tie the knot with your partner.

Celebrities Who Married in France

Hollywood couples are no stranger to destination weddings in France. The most famous couple to tie the knot here are Brad Pitt and Angelina Jolie-Pitt, who married in the south of France in 2014. Actors Bradley Cooper and Salma Hayek join their ranks, along with singers Alicia Keys and Avril Lavigne. 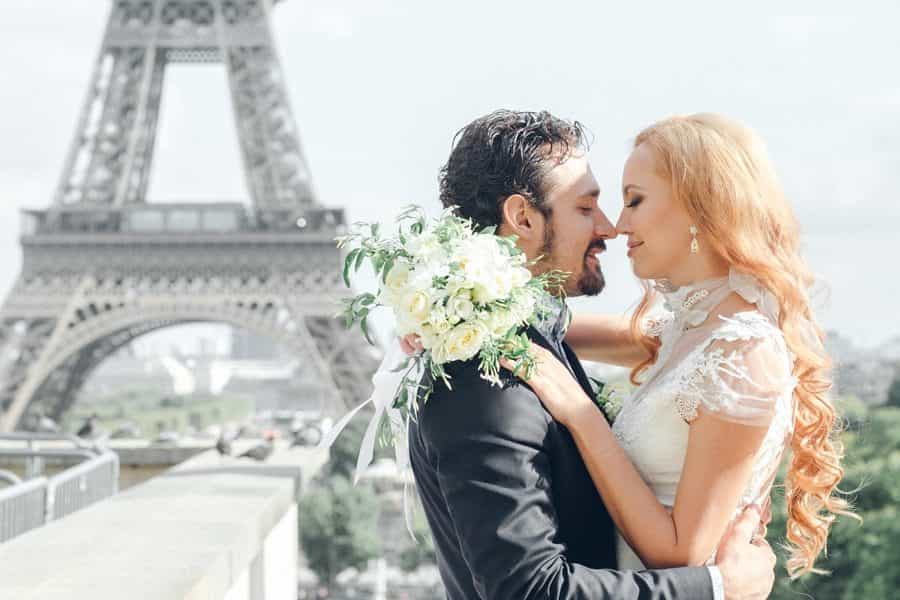 Not sure where to start with your wedding dress? Take a look at some of the wedding designers in France. French designers are known for their classy, tasteful dresses that emanate femininity. Delphine Manivet, Laure de Sagazan, and Fabienne Alagama are among the best to start your search with.

Want to bring some French tradition into your wedding? Start by preparing on the morning of the big day with a ceremonial bath. In French history, brides were known for taking a long bath before the ceremony to symbolically wash away any past relationships. In contrast to traditional British and North American ceremonies, French brides and grooms walk to the venue together instead of meeting on the aisle.

When it comes to the ceremony itself, the French have another tradition that is starkly different to the ones you might be used to – they don’t have bridesmaids or a best man. Instead, they have “children of honour”, similar to flower girls and boys. These children scatter petals, hold the dress, and present the rings.

After the ceremony, the French move from the children of honour to the “wine of honour” – the French term for a pre-reception. Wine, cocktails and canapes are served before guests move on to a traditional seated meal. There is often some dinnertime entertainment, where the guests are subject to an embarrassing presentation of the bride and groom’s history.

And instead of cake, why not send your guests home with a piece of traditional French ‘croquembouche’? This dessert is made up of a tall tower of profiteroles, covered in delicious caramel, chocolate, or fruit.

France is a big country. Not sure where to wed? Here are 3 beautiful locations in France to get you started.

Paris is a great location for a couple whose tastes differ. There’s truly something for everyone in this eclectic, culturally-rich city. Whether you want to marry in a hotel or chapel, you’ll find a wide range of stunning venues here. Not to mention, the cuisine is to die for. 10-time Fearless Photography.com award winner Dan Petrovic is one of the best choices for Paris wedding photography.

Did you know that France has more than just a mainland? The island of Corsica may be in the Mediterranean Sea, but it’s still French territory. Alicia Keys married her husband Swiss Beats here in 2010, and it’s no wonder. Corsica has been nicknamed “the Island of Beauty” for it’s stunning beaches and glorious sunshine. It’s the perfect spot for a waterfront ceremony or reception, and it’s also a great honeymoon destination.

Most commonly known for its film festival, Cannes is a favourite with celebrities and high-end travellers. If you want to tie the knot in a luxury château, Cannes is for you. This is the ideal location for a classic, glamorous ceremony, and its seafront offers plenty of opportunity for activity. Why not get a southern French photographer like William Lambelet to capture every magical moment?

The big day will undoubtedly be magical for the bride and groom, but what about the days surrounding the wedding? You’ll want to make the whole experience enjoyable for you, your partner, and the family and friends who have travelled to join you.

If you’re marrying in the south of France, why not enjoy the warm weather by taking your wedding party out on a stylish cruise? When you’re done pampering, take a trip to a traditional French ‘palais’ (castle) or vineyard to get an authentic view of French culture.

If you’re marrying in the north of France and the weather’s a little chillier, there’s plenty to do indoors. The French are known for their unusual cuisine, so take a gastronomic cooking class and learn how to prepare snails or frogs legs.

The nightlife is just as good as the day life. Paris, Marseille, and Lyon are all known for their upscale bars and nightclubs. Le Baoli restaurant club in Cannes is a favourite evening spot for celebrities.

6. Best Time to Get Married in France

As in most parts of Europe, many weddings in France fall around the late spring, summer, and early autumn months. Generally, the northern parts of France are colder than the southern regions. Lille (north), for example, hits 18C in the summer, while Cannes (south) reaches 22C. If you want an outdoor wedding, it’s best to avoid May – the wettest month in France. Winter off-season dates may be cheaper, but remember that France can reach freezing temperatures around January and February.

France is a secular country, so there are no religious laws governing weddings. Same-sex couples from compliant countries (including the UK) can legally marry here, too.

To be considered legal, all marriages in France must take place through a civil ceremony via the ‘mairie’ (mayor). However, if you would like to have a religious ceremony, you’re free to do so before or after the legal ceremony.

This all seems simple, but there’s one catch – either the bride or the groom must be a French resident, or have a parent who is. If you don’t satisfy this criterion, your easiest option is to marry legally in the UK before holding a symbolic ceremony in France.

8. Why Hire a French Wedding Planner?

There are several great wedding planners in France, including Dream Weddings Europe. Many brides consider hiring an organiser to be essential when planning a destination wedding. There are laws to get around, language barriers to cross, and physical distances to overcome. A good planner will already know their way around these difficulties, giving you time to focus on the fun things like choosing a cake or a theme.