It was the year 1642 when Lady Camilla Savelli, a Farnese noblewoman, commissioned the convent of “Santa Maria dei Sette Dolori” and the adjoining homonymous church to Francesco Borromini

It was the year 1642 when Lady Camilla Savelli, a Farnese noblewoman, commissioned the convent of “Santa Maria dei Sette Dolori” and the adjoining homonymous church to Francesco Borromini, one of the most important exponents of romance baroque architecture. The unmistakable style of Borromini with his skilful use of flat, concave and convex surfaces that welcomes the guest at the arrival.

The hotel owes its name to the founder of the religious institution. Following a remarkable renovation which respected the typical architectural rules of the Baroque period and the original project by Borromini, the convent was turned into a four-star hotel in 2007.

The rooms obtained by the cells once used by the nuns reveal all their ancient beauty and with their decorative ceiling beams and antique furniture. They are luxurious but not sumptuous. They represent a synthesis between the Antique and the Modern, where attention to detail and elegance are blended together. 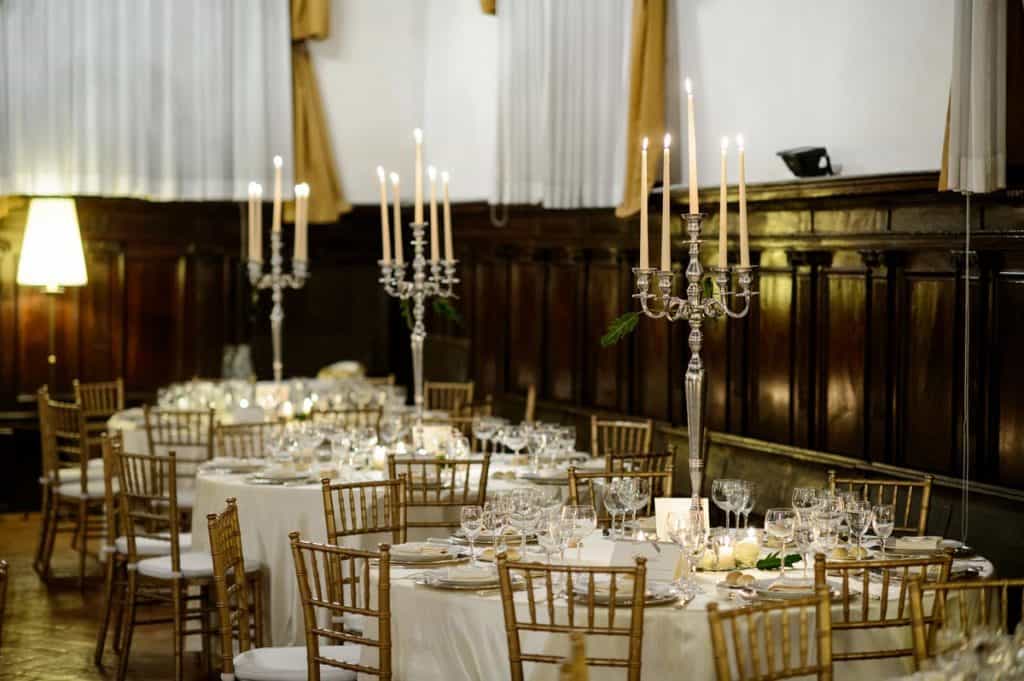 The cloister at the Donna Camilla Savelli gives the impression of travelling backwards in time. In the middle of the garden, there is a baroque fountain surrounded by a beautiful garden. A suggestive location for parties and special events or simply for unforgettable relaxing moments.

An enchanting terrace, overlooking the Capital Hills and its roofs, is the perfect setting for cocktails and exclusive dinner. At night, the guest becomes a privileged spectator of a unique scenario.

With its refined and suggestive atmosphere, Sala Borromini is the perfect location for either meetings or banqueting. An architectural jewel, in the heart of Rome.

The cloister-garden, wonderful setting for banqueting and parties up to 300 people.

During the XIX century, the famous Italian architect Gaetano Koch built two twin palaces overlooking the majestic Piazza della Repubblica also known as Esedra, as the Romans used to call it because of its semicircular shape.

The Hotel is nestled in the “dolce vita” street, popular worldwide because every corner recalls many memories, pieces of history and myths. The facades are just the first and most apparent evidence of the perfect union of olden and modern times

Welcome to Rome, where dream weddings come true. A magical atmosphere brings to life a vibrant tapestry of traditional artistry, style, food and craftsmanship for an unforgettable moment in the Eternal City. Begin your forever after in Rome.

Your Dreamshaper: that’s who I am. Passionate about Rome, Italy, love and fun. Ready to dream with you to make your Big Day the one-of-a-kind experience you will always remember with joy.

ROME Via Garibaldi, 27 00153, Rome, Lazio, Italy
Get directions
Message successfully sent
Sorry, we could not complete your request, please try again later.
Send a message to

The Mons Calpe Suite is located at the very Top of the Rock of Gibraltar and is a wedding venue like no other. Located within the Cable Car top station complex,

Three times Winner of Wedding Ideas Magazine ‘Best Wedding Venue’, this magnificent Tudor mansion is one of the most sought after wedding venues in the country and has

An illustrious palace enjoyed by the great and the glamorous for centuries, few settings run as rich in allure, beauty and a vivid sense of history as Kensington Palace. Still home to British royalty,

The House provides a unique setting for your special day. From the grandeur of the Great Room or the intimacy of a candlelit ceremony in the subterranean vaults, our professional and dedicated team will create a perfect day.