For the most wonderful day of your lives, everything has to be perfect. Every detail of a wedding is planned according to the colour scheme and the style you want for your celebration.

LOVE IS FOREVER. SO IS A VIDEO.

For the most wonderful day of your lives, everything has to be perfect. Every detail of a wedding is planned according to the colour scheme and the style you want for your celebration. You put so much energy into the preparations and setting, and it would be a waste if all the magic was over in a matter of hours! It would be a shame not to immortalise the laughter, the voices, the tunes and the words… This is why happy couples choose nozzedafilm.it to ensure that their memories of a very special event last forever (in images and sounds). 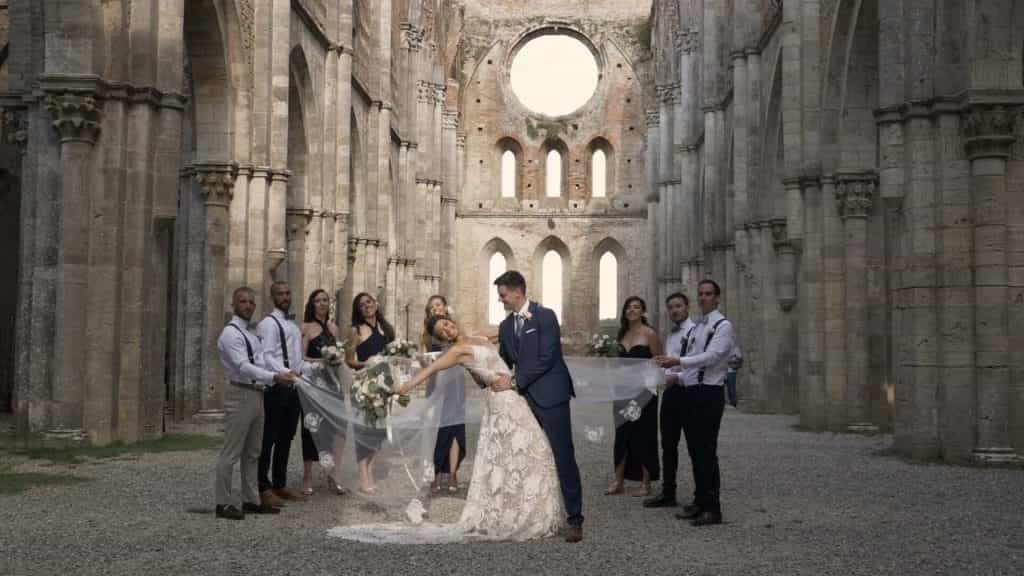 The video nozzedafilm.it is planning for you will turn you into the protagonists of a dream. An unconventional video, far from the usual clichés. You’ll be completely free to move around without any worries about backgrounds or poses; you’ll live every moment with smiles and tears, with nothing to concern you except being yourselves. The love and joy in your hearts on your wedding day will shine out in your wedding film too, allowing you to watch and listen to that series of unforgettable moments as many times as you like. Powerful images, cinema quality, moving soundtrack, enormous emotion. The original and creative films of nozzedafilm.it stand out for their dynamic editing and their cinema-style angles.

Nozzedafilm.it works with the most advanced equipment and technology for both audio-visual recording and post-production, with the option of particular techniques such as fast-motion and super slow-motion, time-lapse and hyperlapse. Stabilisation is achieved by the use of tripods, sliders, cranes and steadycams. High-quality sound-recording gear is used to capture the audio. Incredible aerial shots are taken using professional drones and qualified pilots. The result is a film that’s far from boring, that can be watched over and over a thousand times with your beloved, friends and family. A multi-sensory experience to enchant and move you.

On the wedding day, our operators will be at your disposal: nozzedafilm.it creates a reportage of the bride and groom’s preparations and their arrival at the venue for the celebration. Multiple cameras film the ceremony; our operators then film the couple leaving the venue (or the church) and the taking of official photos. The nozzedafilm.it team wait for the bride and groom at the restaurant or venue chosen for the reception. The video will include picturesque images of the place chosen by the couple to celebrate their marriage, followed by the aperitif, the reception, cutting the cake and all the important moments of the party.

After the wedding, once the video has undergone post-production and editing, nozzedafilm.it will deliver an elegant white box containing memories of their magnificent day. The trailer (lasting about 2 minutes) is a real distillation of emotions, with the most striking images and a royalty-free soundtrack, ideal for posting and sharing on social media. The film itself lasts approximately 20 minutes, tells the story of the whole day, and is accompanied by a soundtrack agreed with the couple, making it even more personal.

In addition to weddings, the nozzedafilm.it team makes high-quality ads, commercial films for businesses and music videos. The director, who holds a diploma from the New York Film Academy, brings the same expertise and tools to your wedding film as to any other field, adding a touch of romance.

For a wedding venue with a real difference; discover one of the most sought after venues on the South Coast - the elegant and historic HMS Warrior 1860, situated in Portsmouth’s Historic Dockyard.

4R Luxury Events is a luxury wedding planning company that specialise in curating beautifully elegant and modern weddings.  We are based in Manchester, United Kingdom, and cater to the northwest and surrounding areas.

Founded by Anna Smith, who has over 5 years experience in the wedding and event industry. Anna Elizabeth specialises in weddings, civil partnerships

Hampton Manor is a truly stunning venue for weddings and ceremonies-described by wedding photographer Damien Lovegrove as a 'world class landmark hotel'.