5 Star Weddings speaks to the UK’s top Michael Bublé tribute act, Ricky Arthur, to find out which hits are on wedding couples lists, what it’s like to be continuously mistaken for the real singer and why Michael Owen didn’t get to see him perform.

Ricky Arthur: I get so much respect wherever I go which predominantly are at events such as Theatres,Corporate clubs and weddings

5 Star Weddings: Are you a popular act for couples on their wedding day?

Ricky Arthur: Yes ! I do on average about six weddings a month and got picked out of many Bublé tributes to represent the stage magazine division Book the act at Earls court weddings convention showcase in 2010 where I won many dates for weddings in the UK. It is by far the fastest growing target market for me, which has been brought on by word of mouth.

5 Star Weddings: What are the most popular song choices requested for the Bublé Fever band?

Ricky Arthur:At weddings it seems to be for the first dance, Hold on , Everything or Lost.

5 Star Weddings: Have you met Michael Bublé in person yet?
I met him offstage as he was singing in Sheffield arena and he shook my hand, but he looked up at me a bit shocked – Well I was wearing exactly the same suit,tie as him! Lol !

5 Star Weddings: Do you ever get mistaken on the street for him?

Ricky Arthur:Very ,very often, people seem to break their neck as they pass me and shout Bublé ! Lol ! At Sheffield in 2010 was the funniest I never seen so many people shout out Bublé to me- I think its really when I put the Bublé suit on when people seem to notice a lot !So my dad is ordering a Brad Pitt suit – Hes still got no chance ! Lol !

5 Star Weddings: When did you first start impersonating Michael Bublé and why?

Ricky Arthur:I was singing classically in Wales in Theatre in 2009 and also working as a lead singer of a tribute band in Europe and wherever I WENT Agents and people in the crowd would say after my shows–“ If you become a tribute to Michael Bublé you will earn a fortune “

5 Star Weddings: Have you ever performed for any celebrities?

Ricky Arthur:I have a regular contract/spot at Ricky Tomlinsons club the green room in Liverpool and he is the nicest person I have met in showbusiness, plus I have sung for Enzo Calzaghe – Worlds top boxing trainer and Joe Calzaghe undefeated World champion boxer.

5 Star Weddings: We heard that Michael Owen wanted to watch you once but was unable to, tell us more.

Ricky Arthur:Bibis Restaurant where I have a regular spot is managed and staffed by over 150 Italians – It is the top restaurant in the UK- Unfortunately the staff their didn’t recognise Michael Owen at the door and turned him away – Our PR company have contacted his PR company to offer a champagne night to say sorry – I was not happy as I am a big Manchester United fan. 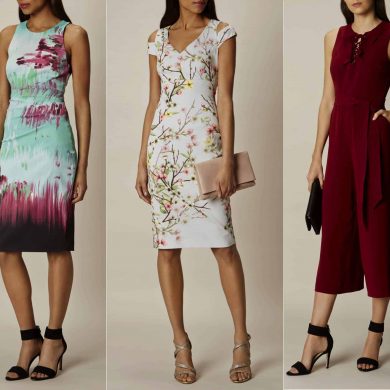 Be the best dressed guest in Karen Millen