Ever since I was a child, I have known where all of the best secret spots can be found in the sprawling grounds of Cliveden House. I know where to locate the turtle fountain on the edge of the woods, in a clearing overlooking the Thames and Buckinghamshire countryside. I know that if you run too fast between the neatly topiaried bushes on the parterre, you may skid and end up wedged in the hedge. I know that a hospital was built on the grounds in the First World War and that, if you know where to look, an eerily sad little graveyard can be found deep in the heart of Cliveden’s 376 acres.

But, until last week, I have never set foot in the magnificent house at the centre of the expansive National Trust land. The house has always looked like a fairy tale palace to me; in fact, it looked just like the one in a favoured edition of Cinderella I read over and over again, or like a brilliant doll’s house that was to be looked at but not played with. Finally, I had been given the chance to climb inside and explore.

Spring Cottage, part of the hotel located by the banks of the Thames. photograph courtesy of Cliveden House

Today, Cliveden is a country house hotel and wedding venue, comprising 38 bedroom suites and a separate cottage on the banks of the Thames, with several areas licenced for wedding ceremonies. This regal Victorian mansion is, at heart, a party house. It was originally built in 1666 – although it has burnt down twice in its 400 year history –  by the Duke of Buckingham for his esteemed mistress, Anna, Countess of Shrewsbury. It passed hands many times over the centuries to eventually be gifted to American millionaires, Waldorf and Nancy Astor, on the occasion of their wedding in 1906. From this romantic start of a new era, the house became a famous spot for lengthy house parties frequented by the VIPs of the day. Each of the beautiful 38 bedrooms here are named after one of the house’s illustrious past guests – Churchill, Chaplin, Mountbatten, Henry James…

It was with these historical spirits in mind, that I stepped – with some trepidation – through the imposing doors of the hotel last week, to meet wedding planner Magda and spend a night as the latest in a centuries-long guestlist of awestruck visitors to Cliveden. I think my nerves were understandable, as I wondered if the staff might be haughty, and if we’d be the only guests not flanked by bodyguards or arriving via the helipad instead of the driveway (that’s not a joke, Cliveden does indeed have helicopter access). But my silly worries were needless, and upon arrival we were met at the door by the highly personable and friendly Michael, Cliveden’s longest serving staff member, whose house tours – we were told – are incomparable, and who never forgets a guest to the hotel even if decades have passed.

All the staff would smile and say hello whether they were passing us in the hall, stopping to hold a door for us, or bringing us drinks by the pool, and the little details taken care of to really enhance our stay were the icing on the cake. We were granted a beautiful suite, Blakeney, overlooking the parterre gardens on the south side of the house. My name was written on the bedroom door, and inside my boyfriend and I discovered champagne on ice, a fruit platter, bottled water, shortbread, and even a decanter of sherry. As we kicked off our shoes, threw open the windows and collapsed onto a velvet sofa with a glass of champagne, my boyfriend gestured around the room and announced “I’ll take it!” If only we really could have moved in.

We were told by Alexandra, the head of sales at Cliveden, that their service ethos is to make guests feel like they are visiting a family home – perhaps as though they are the cordially invited guests of Nancy and Waldorf. Hospitality there is a serious way of life and all staff give off the impression they are simply proud custodians of a very special place.

So, when it comes to wedding planning at Cliveden, you can imagine how this day-to-day impeccable service translates into something extremely special for a bride and groom-to-be. Magda, resident wedding planner at the house, is passionate and knowledgeable about her industry and she treated us to a tantalising insight into what a spectacular location for a wedding Cliveden is. The house currently has multiple rooms licensed for ceremonies, and they are considering adding another – as if the glorious French Dining Room, the Great Hall, The Lady Astor Suite, The Mountbatten Suite, or the beautiful Andre Garrett restaurant weren’t hard enough to choose between as it is. 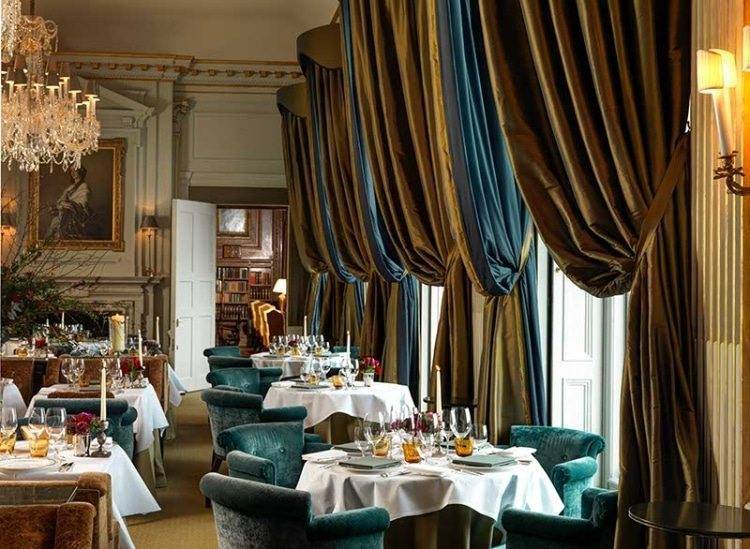 An aspect of the recently restored and refurbished Andre Garrett Restaurant. Expert interior designers took inspiration from the colours in the original oil painting above the fireplace to create the colour scheme of greens, golds, brown, and duck egg for the rest of the room’s furnishings. 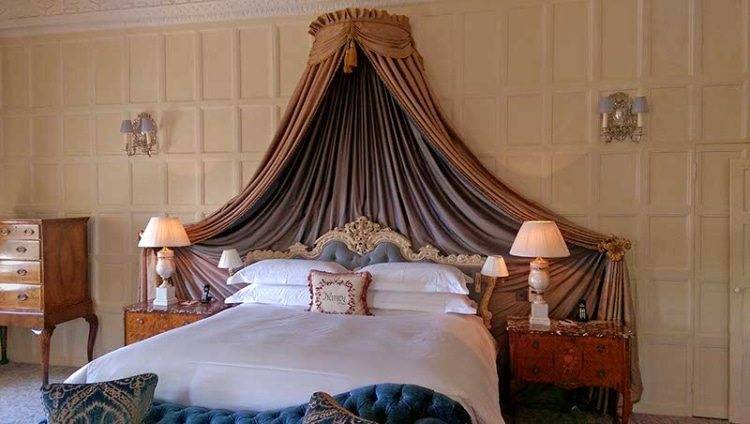 The Lady Astor Suite is licensed for weddings and serves as the hotel’s honeymoon suite. It is the only suite in the hotel with its own private terrace. 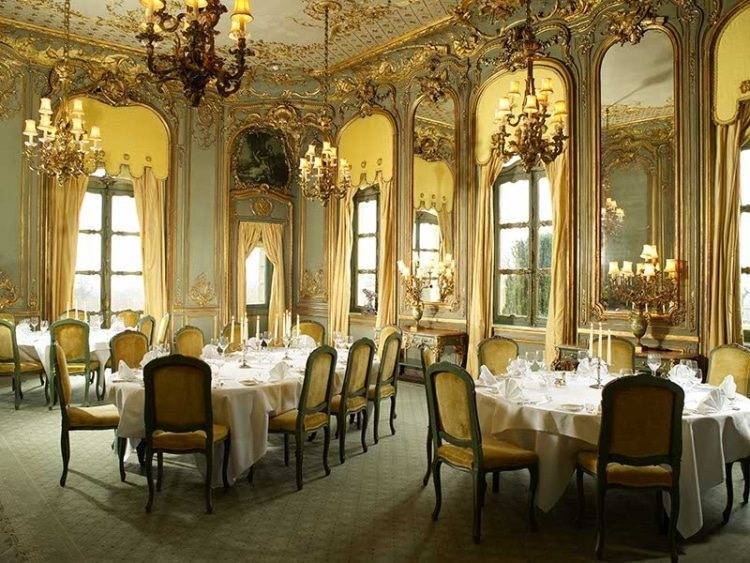 The French Dining Room, which previously belonged to a French chateau, hence the name. Waldorf Astor purchased it in the early 20th century and had it shipped to England in pieces. Photograph courtesy of Cliveden House

The choice depends, of course, on the size of the wedding, and options range from small, informal and friendly ceremonies – held, perhaps, in one of the magnificent bedroom suites – with just a handful of guests, to a full takeover of the house (including Spring Cottage, by the river) for a larger party of up to 160 people. Whatever the size of the event, Cliveden has a ‘one bride’ policy. It would certainly be logistically possible to hold two weddings on one day, perhaps without either couple catching sight of the other once, but the policy is to create an unforgettable day, and that requires the full focus and attention of the events staff.

Spellbinding Weddings At The Shakespeare’s Globe

It was easy to start allowing my mind to wander as I toured the house… in the Lady Astor Suite I found myself trying to choose where the altar should be – by the intricate, carved stone fireplace at one end of the room, or under the glorious, blue silk canopy at the opposite end? For couples marrying in this suite (which was, for decades, the formidable Nancy’s private bedroom suite, complete with enormous bathroom and private terrace) Magda explained that the bed would be removed to make room for more informal seating until after the ceremony when, as the party moved to a dining room, the bed would be reinstated, the flower petals scattered, and the champagne put on ice. Simply divine.

Or, I thought, could I see myself (and a willing groom) taking over the whole house for the night of our lives? With exclusive use of the house, I could make my entrance down the grand, oak staircase and down the aisle of the beautiful great hall. After the ceremony, weather permitting, we could spill out onto the terrace for canapés and champagne – after hours, the National Trust grounds close to the public so our guests could roam the parterre and explore the grounds, while the Mr and I lean elegantly on the Italianate balustrade for our photos… where was I?

Getting carried away is not hard because, with Cliveden, to see it is to want it. Magda told me, as she showed me around the spectacular French Dining Room, which is resplendent with gold gilding and huge mirrors, that at Christmas this favourite spot of Lord Astor’s glitters with Christmas trees and lights. “A guest who came for the Christmas package last year fell in love with the place, and she decided she had to have a Christmas Cliveden wedding”, she told me, as I took a mental note to come back for the Festive Afternoon Tea this winter.

Later, as I lounged contentedly by the heated open air pool (often known as that pool, to anyone familiar with the 1966 Profumo scandal) in the spa’s walled garden, I got an unexpected interview with another Cliveden bride when I happened to get chatting to a woman whose own wedding was held at the hotel almost ten years ago. “It was the best wedding I’ve ever been to”, she said, “I know you shouldn’t say that about your own wedding, but it’s true. Nothing, nothing was too much trouble for the staff on the day.” 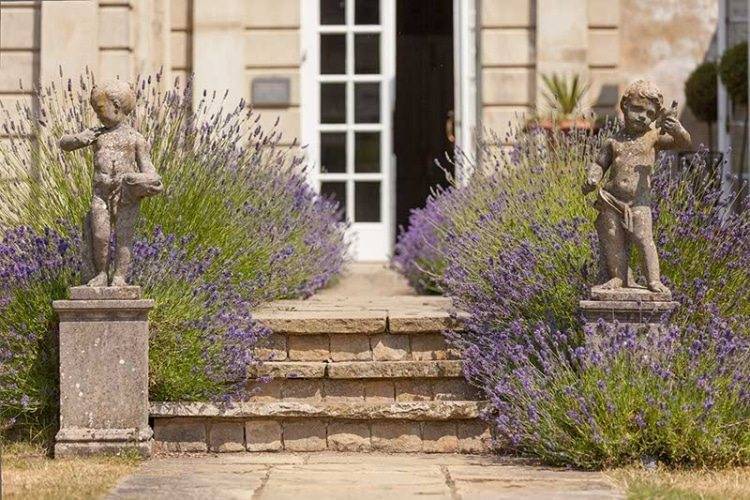 Lavender and rare (but totally harmless) bees can be found in the walls of the pool garden. Photograph courtesy of Cliveden House

Cliveden is more than a hotel or wedding venue, it’s a piece of England that holds in its walls stories from some of the most captivating characters in history. For any brides, especially those from overseas, dreaming of classic country house wedding, you could not find a place more bursting with character, beauty, and 5 star luxury. As a location for weddings, it comes highly recommended by us; everything, from the pillows on the beds to the flower petals garnishing André Garrett’s sumptuous haute cuisine, was perfect. Guests at Cliveden are made to feel like they are becoming new characters in the very long story the house is telling. Long may it continue. 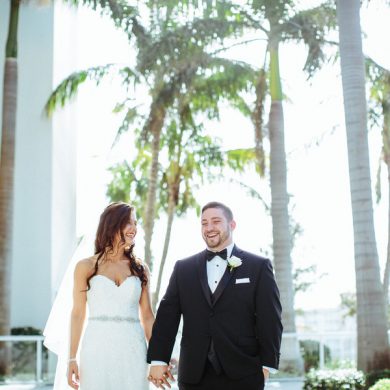