Key Traditions in a Greek Wedding – Emotional and Moving Weddings

If you decide to get married to a Greek man or woman, you should keep in mind that Greeks are very traditional people and follow the habits and customs of their country or region almost religiously. Key traditions in a Greek wedding are interesting, sometimes fun and definitely old since they originate from the ancient years – with numerous additions and variations that came with time and the historical evolution of the country. They are practically endless but there are some traditions that are usually followed by all Greeks.
Here we are presenting some of the Key traditions in a Greek wedding: 1. Before the Wedding Ceremony

According to the traditional practice, Greeks are supposed to have an engagement before the wedding. The man has to ask the girl’s father for his permission to marry her and then the couple should exchange rings and gifts. A priest blesses the rings both during the engagement and during the wedding. During the period of engagement, the couples wear the rings on the left hand and once they are married on the right hand.

2. During the Wedding Ceremony

The most important key traditions in a Greek wedding are the ones during the wedding ceremony. Unlike most countries and religions, a Greek couple doesn’t exchange vows but is blessed by the priest. Most Greek weddings are religious ones and take place in a church, although couples who wish so can have a civil wedding.

The guests of the ceremony bring their presents for the couple and are asked to wait outside the church; the groom and all the family members are there, waiting for the bride, who comes a little later, wearing a bridal dress and sometimes a veil, which is supposed to protect her from the evil spirits. The couple enters the church and stands in front of the priest, who sanctifies the wedding rings during the Sacrament of the Marriage. The rings are now worn on the right hand.

The couple joins hands to signify the unity and the priest reads a series of blessings and prayers. The most important part of the wedding ceremony and one of the most significant Key traditions in a Greek wedding is the crowning of the couple. The bride and groom are crowned with small crowns made of flowers and ribbons, called Stefana. Stefan represents unity and is a symbol of God’s grace given to the couple. The man who places the crowns on the couple’s heads is the sponsor of the couple, called koumbaros – something like the best man in the Catholic weddings. Once done with the Crowning, the priest reads a blessing called “Isaiah’s steps”. During this blessing, the couple has to make the first steps as “one” 3 times around the altar. At that time the guests throw rice to the couple so that their relationship roots.

Usually, once the ceremony is over the couple comes out of the church and stands at some place allowing the guests to come and bless them, one by one. When the guests are done with the blessing of the couple they receive a small reminiscent of the ceremony, called mpoumpouniera (bonbonniere), with candied almonds.

Later on, the party time comes. Wedding receptions in Greece are all about eating, drinking and dancing. It’s a celebration of the union of the couple, their families and friends, so everyone participates there and has a great time. According to one of the Key traditions in a Greek wedding, the couple has to cut the wedding cake, eat the first piece and open the champagne. In the vast majority of Greek weddings, the atmosphere is both moving and fun since emotion and entertainment are key aspects of a Greek’s life. 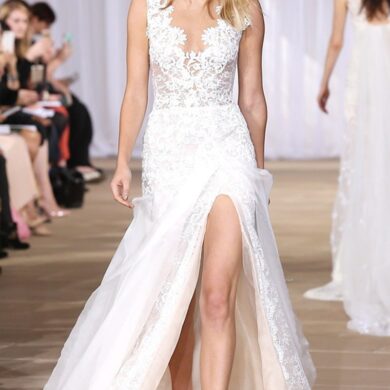 Five of the Best from New York Bridal Fashion Week